This is a VA-11 HALL-A fangame, we are not Sukeban Games nor affiliated with them.

In this world, where corporations reign supreme, and all human life is infected with nanomachines designed to oppress them; bartenders spend their workday chatting up ladies and spend their paychecks on useless shit.

But this is not about those people.

Ever wondered who's keeping the bar afloat? It ain't the bartender, that's for sure. While they're busy flirting with pink haired girls, one man must do what he can to keep the wheels of capitalism well greased and the booze flowing.

That man is the barback.

Experience life from the eyes of an average Glitch City denizen just trying to make ends meet, get down with the nitty-gritty side of bartending they don't show on TV.

And maybe, just maybe, see things from a different point of view.

Just another day in a bar without end

Controls:
Advance text using a variety of intuitive controls, pause with Esc (can't do this during the intro cutscene though), where you can access the options menu and save/load (only available at specific parts of the game).
The rest of the controls are explained in-game; make sure you have some sort of mouse!

Special Thanks:
The rest of the Cool Beans
kiririn51
Sophicsheep
Sukeban Games
COVID-19

hi i cant leave a super long review bc the font on this page fucks with me but this was a great game. i ended it wanting more - the mini games were fun the dialogue felt so real. the people were interesting and i loved the tidbits of lore <333

Ok look i don't post a lot of reviews and if i do it a game i genuinely hate or love and this game right here i love it and it in my top 20 list since i like the bartender cleaning concept so goddamn much but this game fails to execute some elements that has been turned into a weird mash of love and rusty nails that try to give you tetanus every step of the way.

THE GOOD
The Art - Both background and the sprite work is pretty good it not eye bleeding bad but it also not AAA or top-tier indie pixel art but it mid-tier which does it job and i like overall good job Player_Unknown08 & Auitys.

PURGATORY and Glass Cleaner were actually sort of branch projects from this one, we were already making Barback Blues and just used each one as an excuse to accelerate development by making new minigames in the form of jam games (obviously glass cleaner ended up just like that in the main game, so it's basically like a piece of Barback Blues taken off of it and put out standalone).

the money thing is pretty intentional, i think of the part where it shows the final number before draining it as some sort of hi-score screen, but you can also see it's connected to exactly how Gil would feel. though tbh money was indeed more of a last minute addition, and it was going to be even more of an afterthought, but i made sure you can "compete" for hi-scores so to speak, so there's no random element and if you're faster than other people you can get a higher one by the end of the game (even if everyone does end up at $0 story-wise). my hi-score is $318.38 by the way.

dialogue choices was definitely something i, me personally wanted to do but it ended up not becoming anything since we just wanted to release the game. i actually wanted to integrate purgatory as a choice at the beginning (unlockable post-game choice) where you can choose to kill yourself and end up in the purgatory game, then after it ends the story continues as normal/restarts without the choice.

all in all the tediousness and emptiness of a shitty job is one of the main things about this game, so arguably it worked, but maybe it could've been made more engaging in some way. i don't think we're gonna update this game ever again though (besides from bug fixes or something).

"a weird mash of love and rusty nails that try to give you tetanus every step of the way" is the funniest and most accurate thing i've read about this game, moreso about its development process. reviews like this make it worth it, thank you. might not update this but we're gonna make bigger and better shit that's for sure.

lmao thanks for the laugh mate

Yeah it cool mate and good try to handle the story i know it must of been a heavy bitch to work on man but when my PURGATORY lemon dating sim?

bruh the games are free

don't tell me you've been paying for them

how do i do the lemon juice part?

You just gotta press Space a lot! You're done once the juice container thing gets reset but you can keep juicing for more money.

So, little problem I had: During the glass-cleaning section, space wouldn't do anything so I couldn't clean more than one glass.

Make sure you clean all the stains! Sometimes they aren't quite visible, but you'll know it's still dirty if the SPACE prompt hasn't popped up. Otherwise, that would be a strange bug.

I did! I made sure to dip the cup in all the colors multiple times just in case, but the Space prompt never came up. I had to reset the game for it to get working.

That's strange, I'll definitely look into it; thank you for the report.

"This is a fan game, we don't worry about litigation here." 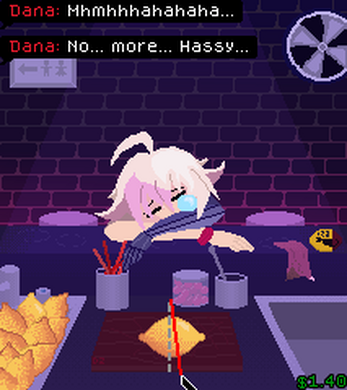 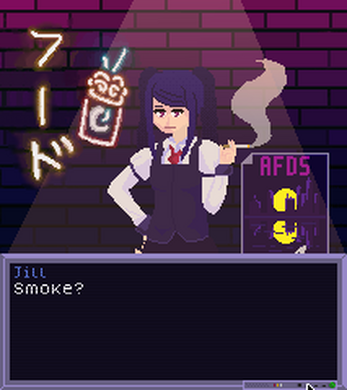 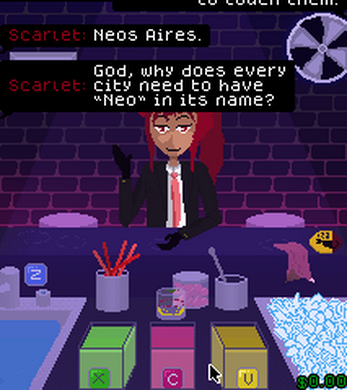